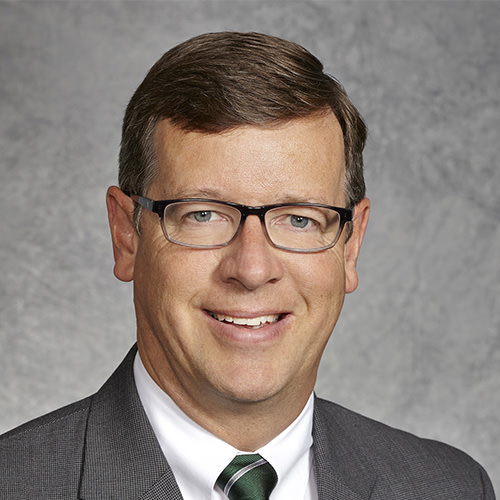 Dr. Andy Bowne serves as Senior Vice President and Chief Operating Officer for Ivy Tech Community College, having assumed the statewide role in August 2016. Dr. Bowne joined Ivy Tech in October 2012 as the Chancellor of the East Central Region. He then assumed leadership of the Richmond Region in January 2014.

Prior to joining Ivy Tech, Dr. Bowne served at Grand Rapids Community College as the Associate Vice President for College Advancement. Before his leadership in the development function, he served as the Executive Director for Workforce Training and Economic Development. In addition to his work in community colleges, he worked in traditional economic development roles as well as in workforce development leadership for manufacturing companies in West Michigan.

He earned both his Doctor of Education and Master’s degrees from Western Michigan University with concentrations in Human Resource Development in 1999 and 1989 respectively. His Bachelor’s degree is in Geography/Urban & Regional Planning. Dr. Bowne has extensive adjunct teaching experience at Cornerstone University, and at Ferris State University’s doctoral program in Community College Leadership.

Dr. Bowne currently serves on a number of local and regional boards and organizations including the Alliance for Strategic Growth and the Muncie-Delaware County Chamber of Commerce. He recently served on the statewide Thriving Communities/Thriving State Rural Communities Commission, and with other local and regional organizations across East Central Indiana, and previously in West Michigan. He is a member of the Muncie Downtown Rotary Club and actively involved in Special Olympics.