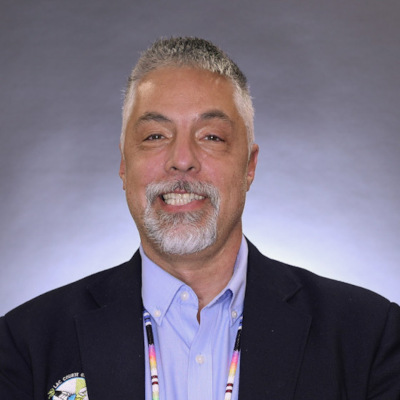 Dr. Russell M. Swagger is president of Lac Courte Oreilles Ojibwe College, a Tribal College located in Wisconsin serving five Ojibwe tribal nations. He previously served as a dean of student services at two other tribal colleges and a CEO of a rescue mission for people experiencing homelessness.

He is an enrolled member of the St. Croix Chippewa Indian Tribe of Wisconsin. He credits people within the Tribe for helping him realize his potential. He always believed his contributions to education are for people who would later move on to help others improve their lives.

His higher education journey started in 1990. His grandfather worked with the education director to enroll him in police science at United Tribes Technical College. His grandfather planned for him to return home after college and preside as the first Tribal Police officer. His grandparents passed away while he was away at college so his plans changed. He continued on to get a bachelors in criminal justice, a Masters in management, and a Ph.D. in human services.

Swagger was fortunate to learn from the founders of the Tribal College Movement. He never purposefully set out to be a Tribal College president. He chose that career because he had an opportunity to return home and share the gift given to him by his mentors in the St. Croix Tribe. He now helps other Ojibwe people become educated so they can help other tribal members achieve success.

Swagger is eternally grateful to his St. Croix Chippewa Tribe for all their help over the years. He is especially thankful to the Lac Courte Oreilles Ojibwe People for inaugurating him as their college president and entrusting that responsibility to him.