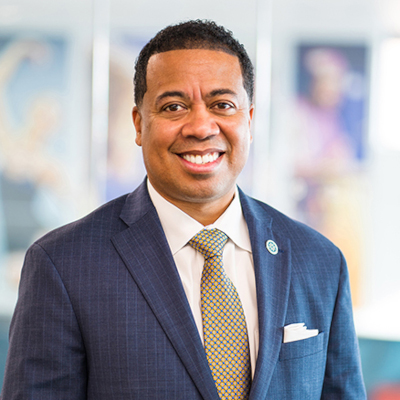 Todd Kitchen serves as the president of the Eastern Campus of Cuyahoga Community College in Cleveland, Ohio. A native of Moberly, Missouri, Todd graduated from Moberly Senior High School, and attended Moberly Junior College pursuing a degree in Music. After completing two years at the junior college, he deviated from the traditional education path and enlisted in the United States Army in 1989.

During Todd’s time in the Army, he deployed to the Middle East in support of Operation Desert Shield/Desert Storm. At the conclusion of the initial combat phase, Todd was selected to serve as a member of the 1st Infantry Division Color Guard, and represented his division in both Washington D.C. and New York City. He later returned to college while serving in the Army and earned a bachelor of science in Human Resources Management from Friends University (1998). He then earned a Master of Arts in Sociology from the University of Central Missouri in 2002. Todd earned a Doctor of Education in Educational Leadership and Policy Analysis in 2012 from the University of Missouri-Columbia.

Todd started his career in higher education at Wentworth Military Academy and College as an admissions recruiter and adjunct instructor. He later served as the director of admissions, social science faculty, dean of business and administration, and associate vice president for academics. After 10 years of success in Missouri, he and his family relocated to Northwest Arkansas, where he was employed by Northwest Arkansas Community College. He has served as director of admissions, dean of learner administrative services and vice president for student services (student affairs). His research interests include leadership, leadership development, and non-cognitive factors impacting educational success. He has served on non-profit boards and has been actively involved with church communities for nearly three decades.

Todd has earned leadership awards in both his military and civilian careers. His greatest passion is helping connect people to resources, information and opportunities that will help maximize their potential. His hobbies include reading, coffee, golfing with his wife, Andrea, NCAA basketball, and spending time with family and friends. Todd and his wife Andrea have three adult children.